Who are people using for advertisers on their blogs? 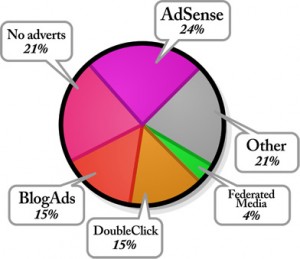 Blogging is big business these days, and most (79%) of the Top 100 blogs had some form of advertising. A mere 21% had no explicit advertising at all.

he most popular form of monetization is the ubiquitous Google Adsense, appearing on 24% of the Top 100. Easy to set up, and with a large catalog of advertisers, it’s a common choice.

How to start a blog off in style