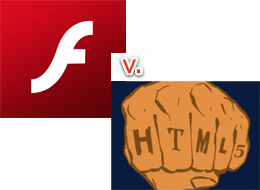 A few weeks ago, tensions between Adobe and Apple rose to all-time highs after Apple prominently left Flash off of the iPad. A lashing by Steve Jobs, calling Adobe lazy and Flash buggy didn’t help matters at all.

The problem: Apple believes that Flash shouldn’t be part of the web’s future. Instead, the company believes that HTML5 is what will define the web and would love to see more developers adopt it instead of Flash. Now that big video sites such as YouTube (YouTube) are testing support for HTML5, Steve could be getting his wish.

That’s why we asked you, the readers, to tell us where you stand on the issue. Adobe Flash vs. HTML5: Which is better for the future of the web? After more than 6,000 votes…

Next week, we’ll do it all over again with another web faceoff. Be sure to tune in and vote!

1 thought on “HTML5 Knocks Out Adobe Flash in Reader Vote”