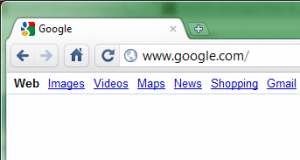 When you see some text prefixed by “http://” you automatically know that what follows is a web address, as defined by the Hypertext Transfer Protocol. The question is — since most web addresses are easily recognizable anyway — do you really need it?

The developers of Google Chrome don’t think you do, so they simply chose to hide it in a developer version of Chrome.

The solution might not be that simple, though. You can hide the http:// bit from a web address, but it doesn’t mean it’s not really there. Worse — as seen from the comments from the Chromium wiki thread, where this feature was actually reported as a bug — it might cause problems for users.

“Many blogs, message boards, email viewing software, instant messaging software, etc. depend on matching against http:// to auto-link URLs. Removing http:// will train end-users to omit it, which will have a negative impact on usability all over the web,” one commenter says.

An example of this is Google Talk’s auto-linking of URL fragments; other issues include copying and pasting web addresses and other related bugs. The folks at Chrome are right about one thing: The “http://” part of the web address serves little purpose and mostly creates noise. The question is: Will hiding it solve the problem?