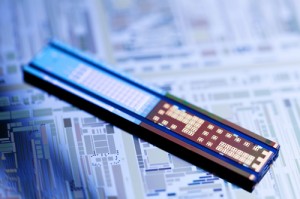 Intel  provided a peek at the future of processors today by revealing the first instance of a chip using complete photonics to send data. Four lasers in the prototype convert light into data at about 50Gbps, or “many” times faster than wired connections. The rate, about 6.25GB per second, would be enough to send an entire 720p movie in one second.

The technology could improve chips themselves but could be particularly useful for when large amounts of data need to be spread over a similarly large area, such as video walls or supercomputers.

Intel bills the photonics chip as a “concept vehicle” that isn’t directly related to future production hardware, but promises that the technology should advance and become more mainstream. Later developments should increase the number of lasers and speed up the light-to-data conversions to where terabit-plus data rates are possible. A modern computer’s entire contents could be sent in a second by that stage, Intel said.

Optical data is seeing its first practical application in Light Peak, which tops out at just 10Gbps and is intended primarily to speed up peripherals.