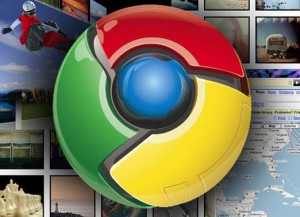 Microsoft’s Internet Explorer 8 is no longer the world’s most-used browser, according to a Web analytics firm. But its replacement isn’t a different version of IE: It’s Chrome, Google’s upstart Web browser.

StatCounter, which tracks Internet data, said that IE8’s share of the browser market fell to 23.5% in the last week of November, trailing behind Chrome’s 23.6%. Since then, Chrome has expanded its lead. It now has nearly 25% of the market, compared to IE8’s 22%.

Chrome had been topping IE8 on weekends since the beginning of October, but Google’s browser finally overtook Microsoft’s for a five-day period a few weeks ago, StatCounter CEO Aodhan Cullen said in a blog post.

“It looks as if people favor Chrome on weekends at home, but office commercial use has now caught up,” he said.

Of course, IE8 is just one version of Internet Explorer. A growing number of people — 10%, by StatCounter’s measurements — are using the more modern IE9. Many are also still using older versions like IE7 and, amazingly, IE6, which debuted in 2001.

Combined, Internet Explorer still leads with a 38.5% share of the global browser market. Google’s Chrome is second and Mozilla’s Firefox is in third place, a percentage point behind Chrome.

The browser battle intensified this year, after a decade-long hiatus, as search competition between Google (GOOG, Fortune 500) and Microsoft (MSFT, Fortune 500) heated up. Searches made in Internet Explorer default to Microsoft’s Bing, while Chrome and Firefox are both tied in with Google’s search engine.

In a constant attempt to one-up one another, the browser makers have been adding a slew of advanced features like extensions, synchronization, privacy, HTML5 support, and hardware acceleration. Google is so serious about staying up to date that it releases a new version of Chrome every six weeks.

Finding itself in the unfamiliar position of trailing its browser competition, Microsoft plans to follow Google’s lead and start implementing automatic updates to IE9 in January, the company recently announced.

Microsoft once commanded more than 90% of the browser market, a position it grabbed by preloading IE on Windows computers. That sent Netscape, the browser king of the 1990s, tumbling into irrelevancy.

It also prompted antitrust suits against Microsoft in both the United States and the European Union, the latter of which forced the company to offer Windows users a list of browsers to choose from when they set up their new PCs.

That, along with the reality that other browsers had outpaced IE’s innovations, has let Firefox, Apple’s (AAPL, Fortune 500) Safari browser, and most recently Chrome eat away at Microsoft’s market share over the years. Internet Explorer’s use has been falling steadily.

A year ago, StatCounter said that Microsoft’s share of the browser market had fallen below 50% for the first time in more than a decade.

But online data tracking is a tricky science, with various methods returning different results. Some trackers record browser information based on clicks to a network of client Web sites, which is the main method StatCounter uses. Others use toolbars, ISP data or even surveys to collect the information.

Though the trend is clear across the board, other data trackers show that Internet Explorer 8 is still firmly on top of the browser world. For instance, Net Applications — the firm whose research is most frequently cited by the browser makers themselves — shows that IE8’s market share sits much more comfortably at 28%, compared to just 18% for Chrome.