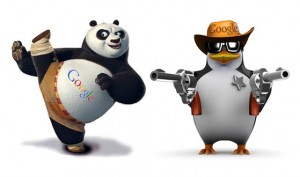 Penguin update went live on April 24, 2012. However, Google had not come up with an official name for it until two days later. Search Engine Land, a popular online magazine that covers search news, asked their readers to provide suggestions on how to name the new algorithm change on Google+ and Facebook. Among the popular suggestion were “Pi”, “OOPs”, “Shark Update” and “Titanic” (the absolute leader). A post on May 20th 2012 by SEO Expert Todd Bailey on Search Engine Guide compares the algorithm and its detection of spam with the life cycle of a penguin and its sense of smell.

It’s o.k. to optimize your site for keywords but there is a fine line between optimizing ans spamming. Knowing the difference can make the difference between benefiting or being penalized.

Google Panda is Google’s way of finding cut and paste or stolen copy used on sites.

Google Panda was built through an algorithm update that used artificial intelligence in a more sophisticated and scalable way than previously possible. Human quality testers rated thousands of websites based on measures of quality, including design, trustworthiness, speed and whether or not they would return to the website. Google’s new Panda machine-learning algorithm, made possible by and named after engineer Navneet Panda, was then used to look for similarities between websites people found to be high quality and low quality.

Many new ranking factors have been introduced to the Google algorithm as a result, while older ranking factors like PageRank have been downgraded in importance. Google Panda is updated from time to time and the algorithm is run by Google on a regular basis. On April 24, 2012 the Google Penguin update was released, which affected a further 3.1% of all English language search queries, highlighting the ongoing volatility of search rankings.

The latest Panda version was confirmed by the company in its official Twitter page, where it announced, “New data refresh of Panda starts rolling out this week. 1% of search results change enough to notice. “July 28, 2012”

Just like Google Penguin you can do a little cut and pasting but think more of doing this as a quote rather then the majority of the article. If you have more recycled content than original content then it’s almost 100% that will be penalized.

There is always the what came first (egg or the hen) theory meaning you post an article someone copy’s it and there site just happens to get seen first. To fight this Google only will penalize you if the content is older and used a lot.

Obviously they have more complex factors but this will get you through the obvious circles.

10 thoughts on “What is this Panda and Penguin stuff with Google?”